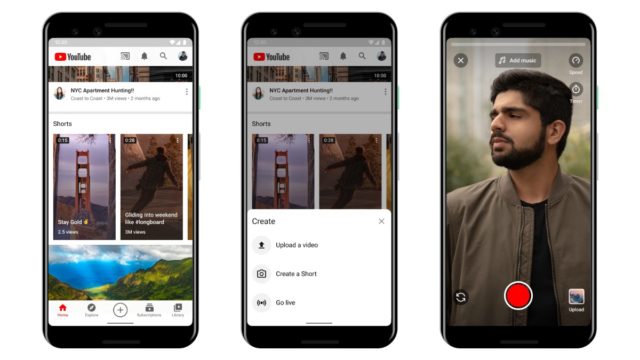 YouTube has announced the release of a short-form video feature. This TikTok rival titled ‘Shorts’ is initially launching in India for now. Over the next few days, the early beta of YouTube Shorts will be out for testing with a handful of creator tools.

Shorts will allow the users to upload a short video of 15 seconds or lesser with the help of creator tools. Additionally, it will also include a multi-segment camera, speed controls, a timer, and a countdown feature.

The multi-segment camera allows the users to combine multiple short video clips into one single clip. However, this feature is really similar to what we have in Tik-Tok and Instagram’s Reels.

It is also reported that YouTube is planning to introduce a new watch experience. This feature will let you swipe through the YouTube Shorts vertically – just like we have in Tik-Tok.

Thanks to YouTube’s huge library of songs, users can add their favorite music to the videos. Most importantly, all Shorts’ features will be available within the YouTube app on Android.

YouTube is also encouraging the users to upload existing short videos as a means to get discovered on their brand new platform.

The widely popular video streaming platform, YouTube, boasts more than 2 billion views per month. Thereby, Shorts users will have enough opportunities to showcase their talent to a bigger audience.